Once upon a time, there was… This is how a story begins, and this is how ours begins.

Yvonne co-owner, creative design and sales:
I’ve been riding horses for many years. Private home, during the riding holidays and once also for my work. Like a short time with the mounted police. Several breeds of horses came and went during these years. But my love and my interest for a certain breed developed during such a riding holiday. And that was the Andalusian, preferably a Pura Rasa Española. An internship with several PRE’s led to the purchase of Bonito. 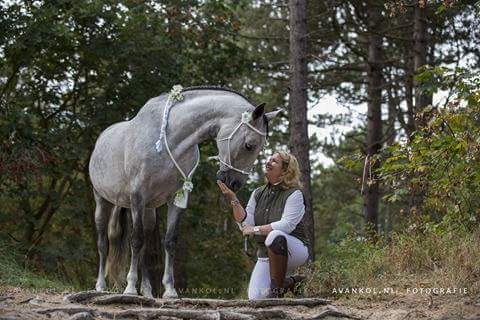 Since a PRE is late mature and Bonito was only 3 years old, I wanted to give him time to develop well. At this time I decided to do a lot of preliminary work with him. For this I bought a rope halter and a lead rope at that time. Frightened by the prices for these kinds of articles at that time, I carefully examined how these articles actually came together. The result was that I was of the opinion that I could do this myself. After buying a roll of a suitable rope, a cautious attempt was made to make a rope halter myself, but for my own use.

Peter: Owner, design and technology
Unlike Yvonne, who had been dealing with horses for years, I had nothing to do with horses at all. Only to see them from a distance, or as an extra in western films or chivalry. After I met Yvonne, I came into physical contact with horses. At that time this was a rebellion. So it came to an experience in the first ride during a holiday trip in Turkey, which after a 5-minute ride ended in a visit to the local medical clinic and almost as a stretcher case on the journey home. Our next own horse was an English thoroughbred and finally the PRE Bonito. In my early days in the Navy I had once learned to work with ropes. With the arrival of Bonito and the idea of making rope hammers myself, these somewhat rusty skills were used again after more than 25 years to make rope hammers and lead lines for my own use. Whatever Yvonne thinks of new products or new design will be knotted by me.

Peter + Yvonne = Freespirit
After our first productions for the production of rope halters and leadrops for our own use, the questions came from other horse owners if we could make them for them too. And just like throwing a pebble into the water, the wave of demand for knee holsters, ground scarf ropes, neck rings, reins etc. spread over time. From manufacturing for our own use to sourcing and contracting from Canada, Great Britain and various countries in Europe, to being present with a stand at international horse shows. Due to the increasing demand for knot halter and lead lines, the demand for other rope colours, but also for other models and products, arose. And so our assortment and rope stock grew and the available storage space became smaller and smaller. Nowadays we specialize mainly in the unique and non-standard articles. We always try to distinguish ourselves and never stand still when it comes to development. Everything can be done according to your wishes, and almost nothing is too crazy or we can do it.

At the end of 2018 we got the offer to rent a former pension in der bayerischen Rhön for rent, with the possibility of buying it in the future. It was a complete house, a work area and 4 guest rooms. We immediately said “yes” and 4 weeks later we moved and officially live and work in Germany from 01.01.2019. Besides the activities for Freespirit Horse Art, we are also busy with the renovation and furnishing of the guest house. It is planned to open the guest house/B&B for guests from May 2019.

Bonito:
Our now 10 year old PRE-Andalusian was absolutely not the first choice for Yvonne during her internship to see with which horse she could have a match. With all the horses she had chosen so far, she had chosen the horse herself. At first there was no match at all with Bonito. He was a wild, hardworking and above all dashing, deep black horse, and he was quite a size too! Threatening he was big and busy behind the bars of his stable. The stable owner and a friend, however, knew better than that this handsome Spaniard would become Yvonne’s new horse. With the thought that everyone had gone mad, the idea was dismissed as a foolish fantasy. But Bonito thought about it quite differently. He kept trying to make contact, which eventually led to a first careful cleanup. After some urging from the stable owner, Bonito was finally saddled and followed a ride in the barrel. A heavenly ride with a cheerful, very good and well listening horse. After that it turned out to be the second time that Bonito had a saddle! And all reservations were gone like snow in the sun and the decision was made. It had to be Bonito. And so it was actually Bonito who chose Yvonne as his future rider and not the other way round. 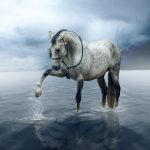 Bonito is our test pilot for all horse articles. If it works for him and if it is strong and safe, we will add an article to our range.

As the last part of our herd there are the boxers Sem and Sarah. Both were taken out of the shelter after our former dogs, also a Boxer and a Bordeaux dog, closed their eyes after 11 and 10 years respectively. Sem comes from the shelter in Harderwijk and Sarah from Turnhout (Belgium). Our dogs also play a role in the freespirit. They are our matching models and mannequins for our dog articles, just like our former dogs were.

We use cookies on our website to give you the most relevant experience by remembering your preferences and repeat visits. By clicking “Accept”, you consent to the use of ALL the cookies.
Do not sell my personal information.
Cookie SettingsAccept
Manage consent

This website uses cookies to improve your experience while you navigate through the website. Out of these, the cookies that are categorized as necessary are stored on your browser as they are essential for the working of basic functionalities of the website. We also use third-party cookies that help us analyze and understand how you use this website. These cookies will be stored in your browser only with your consent. You also have the option to opt-out of these cookies. But opting out of some of these cookies may affect your browsing experience.
SAVE & ACCEPT